Through the Eye of the Beholder

A History of Florida Art

The state of Florida has been the inspiration for not only art but many artists. It has served as the centerpiece for significant work by both natives of the Sunshine State as well as artists who came to it from far-off places. Aside from the traditions of the Seminoles, Florida’s aboriginal people, the first known artist was Jacques Le Moyne de Morgues, who arrived at St. Augustine in 1564.

During his time in Florida, Le Moyne created forty-two pieces of work valued for their artistry and as a unique and vital historical record of that time. Others followed, like John Ogilby in the 1600s. Most of this early work was in the form of illustration, engravings, and etchings.

In the 1800s, some artists turned to portraiture. The aboriginal people became the subject of artists like Charles Bird King, J.T. Brown, and George Catlin. The 1800’s also included some fabulous oil-on-canvas landscapes such as those by John Bunyan Bristol, John Rogers Vinton, and George Harvey.

In the first part of the 20th century, artists came to Florida, such as John Singer Sargent, Anthony Thieme, Louis Charles Vogt, Ernest Lawson, Emile Gruppe, and Laura Woodward. But out of all Florida’s visiting artists, we should not forget about John James Audubon.

Despite all these visitors, Florida did have some native artists. The most notable one of them all was Albert Ernest “Bean” Backus. Backus painted some of Florida’s most beautiful landscapes [Click here to visit the Bean Backus site].

Backus also became the catalyst and inspiration for a group of young men from Ft. Pierce during the 1950s, culminating in what essentially became Florida’s first art movement. These landscape painters, now collectively called The Highwaymen, produced landscapes in virtually 30 minutes using any inexpensive materials at hand but depicted Florida with a craft and vividness unlike anything before. The work was painted fast and was sold fast and cheap, right out of the trunks of cars by the artists themselves. Harold Newton, Alfred Hair, and Roy McLendon are some of the more prominent names from this large group of local artists [Click here to visit The Highwaymen site].

Visiting artists and annual tourists took many of the Florida-inspired paintings out of the state. These paintings are in many northern homes, businesses, and institutions like the Museum of Fine Arts in Boston, Massachusetts. Though Florida keeps changing, its original and charming beauty continues in these many fine artists’ painted works. 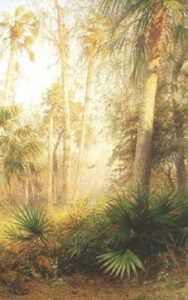 Some of the Artists Who Painted Florida 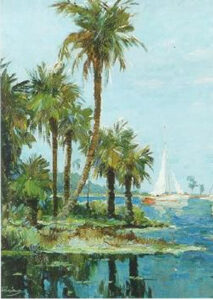 I am a native Floridian who collects Florida artwork. I am especially interested in Hermann Herzog, Anthony Thieme, Frank Shapleigh, and many of the other artists who painted Florida. I am strictly a private collector.

I am not a dealer nor in any way in the business of selling paintings. When I buy paintings, it is to keep in my collection. When you sell to me, you will get the highest possible price for your paintings. Beware of dealers who pass themselves off as collectors; there are some clever people out there doing this very thing.

To emphasize again, I buy these paintings for the love of old Florida, not to make money. I am available right now to buy your Florida artwork. I will pay cash, and I will pay top dollar for paintings that I need to have in my collection. If you offer a painting to me that I cannot fit in my collection, I will happily direct you to a dealer who can pay fair market wholesale value for your paintings.

I am also actively seeking artwork by Florida’s Beanie Backus and any paintings made by Florida’s Highwaymen.